Michele Wucker is a strategic advisor and best-selling author who coined the term “gray rhino” as a call to take a fresh look at obvious, probable, impactful risks that give us a choice to act or not. Her insights help to explain why some people step up to head off the dangers right in front of their eyes, yet others let themselves and those around them get trampled.

Michele introduced the gray rhino at the Annual Meeting of the World Economic Forum in Davos in 2013. It inspired her third book, the influential global best-seller, THE GRAY RHINO: How to Recognize and Act on Obvious Dangers We Ignore, in 2016. Drawing on her earlier work as a global economic policy analyst and think tank executive, she is founder and CEO of the Chicago-based advisory firm Gray Rhino & Company to help business and policy decision makers to use gray rhino theory to improve their risk responses.

To her great surprise, Michele’s readers encouraged her to apply her ideas to more personal issues. Her 2019 TED Talk about using the gray rhino in personal life has attracted more than 2.5 million views. Her newest book, YOU ARE WHAT YOU RISK: The New Art and Science of Navigating an Uncertain World, builds on insights into how personality, culture, organizations, and habits influences on how and why different people respond to looming risks the way we do (or fail to do).

The gray rhino metaphor has moved markets, shaped financial policies, inspired lyrics of a global K-pop hit song by the mega-band BTS, made headlines around the world in more than 50 countries and over 30 languages, and shaped high-level debates from Davos to NATO to the Drucker Forum.

Michele’s 2019 TED Talk has attracted more than 2.5 million views. She is the author of four books including YOU ARE WHAT YOU RISK: The New Art and Science of Navigating an Uncertain World (Pegasus Books, April 2021; Chinese simplified characters edition via CITIC September 2021; Chinese traditional characters via Commonwealth January 2022; Romanian via Creator April 2022; Korean via Miraebooks July 2022). Her third book, the international bestseller THE GRAY RHINO: How to Recognize and Act on the Obvious Dangers We Ignore (St Martin’s Press, 2016), has been a #1 bestseller in China and a #1 amazon bestseller in financial risk management, and is available in Chinese simplified and traditional characters, Korean, Brazilian Portuguese, Norwegian, and Hungarian translation.

Michele is a member of the faculty and Stakeholder Supervisory Board at the DCRO Risk Governance Institute. She advises IRM India, the think tanks Preventable Surprises and APRI Armenia, and the climate-tech start-up Climastry. She has served as a director on the 214 Riverside Owners Board and as an advisor to AVG’s Fission Ventures and to the Dominican Republic Education and Mentoring (DREAM) Project. A World Economic Forum Young Global Leader alumna, she leads the YGL Board Service Initiative and served on the Forum’s Global Futures Council on Frontier Risks.

Her first two books are LOCKOUT: Why America Keeps Getting Immigration Wrong When Our Prosperity Depends on Getting It Right (PublicAffairs, 2006/7) and WHY THE COCKS FIGHT: Dominicans, Haitians, and the Struggle for Hispaniola (Hill & Wang, 1999/2000).

Michele is a former think tank and media executive who worked as a financial journalist then analyst early in her career. Her writing has appeared in publications around the world including strategy+business magazine, The Economist, The New York Times, The Washington Post, and The Wall Street Journal. She has been interviewed by many media including National Public Radio, CNN, CNBC, MSNBC, and Fox News.

Double book cover images below to enlarge and download jpeg: 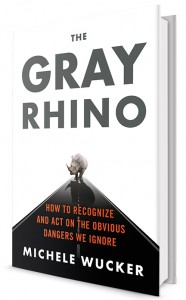